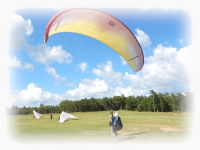 Access is by Buffalo Mountain road, a 4-mile dirt road that is accessed just west of the grounds of the Choctaw Indian Hospital.

Typically, right off launch, pilots will experience a significant dip because of the terrain, even touching the ground.  It is important to head for edge of the rim out front before turning if winds are light.  Do not crab if winds are cross in stronger conditions, point your glider straight at the rim even if it means drifting.  If you get below the rim out front, head for the LZ ASAP or you may not make it.  Always be aware of your ground speed when soaring.  It is easy to drift west and not be able to reach the LZ when the winds are more SE.  In emergencies, pilots may land in the many open fields that are in the Buffalo Valley.  If you do, be on the lookout for cattle!

Top landing is doable for intermediate PG.  Get high and then crab back behind launch.  Stay in front of the dirt road to avoid the rotor.  If winds are above 10 mph at launch expect some turbulence.

Buffalo Mountain launch areas – West slope launch is just beyond the lower left corner of the photo below.

The launch pad is approached from the back by climbing a 6 foot high mound.  Hang checks should be performed before traversing up the mound. In windy conditions it is advisable that launch assistants be used to advance up the mound and stabilize the glider until launching.  Maintain good air speed and fly toward the head wall before changing course in light or cross winds to clear the slope in front of launch.

Middle cliff launch should not be flown in light winds.

Hang glider pilots launching from the Middle Cliff have two options for launching.  In significantly windy conditions (15 mph or better) with a south/southeast flow the pilot can launch with a couple of steps and be airborne over the small cliff.  In lighter conditions the mound on the right side of the launch gives enough slope to create a sufficient distance to accelerate to launching speed before reaching the bluff line.

West slope is the original launch for Buffalo Mountain and is owned by Barbara Hair.  Please do not attempt to drive down to launch, park on top.

Not recommended for PG – When wind is crossing from the west, PG pilots have been known to experience multiple collapses after launching and flying over the bowl in front of the headwall.

The West Launch is a shallow slope launch.  Hang glider set up should accomplished in the south part of the parking area above the launch when numerous pilots are attempting to launch.  Assembled gliders can be carried to launch when ready.  Pilots should make sure the air flow is coming directly up the hill before launching to clear the bench to the bluff.

The Buffalo LZ is immaculately manicured by its owner, Ken Cobb.  The north or south approach is a dream.  Pilots should avoid landing in the eastern half of the field which sloops down to the eastern property line.  Landing with an east final approach must be done while flying over the pond. In a westerly final approach, the tree line is lowest at the northeast corner of the field and entrance can be made there.

View is south from behind the launch areas.  The red zone is private and cannot be used for landing.

A significant hazard is attempting to land during peak thermic conditions.  The LZ is know to spawn multiple dust devils and pilots must be extremely cautious.

During the evening hours, it is not uncommon for wind speeds to blow at 10mph but increase to velocities as high as 30mph near dark and make the entire area above the LZ very turbulent.

There are power lines along the south and south east edges of the LZ that pilots must be aware of.

The north or south landing approach is a dream.  Pilots should avoid landing in the eastern half of the field which slopes down to the eastern property line. Landing with an east final approach must be done while flying over the pond.  In a westerly final approach, the tree line is lowest at the northeast corner of the field and entrance can be made there.

Coming in to the Buffalo LZ after a long flight